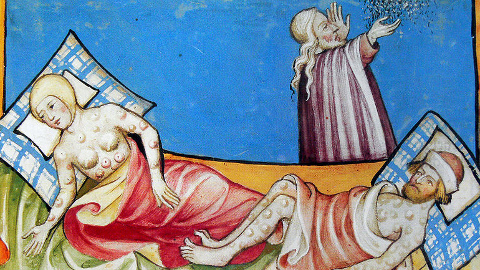 In this seven-part series, I will look at the history of copyright from 1350 until present day. The story of the history books differs quite strongly from what you usually hear from the copyright industry.

We’re starting with the advent of the Black Death in Western Europe in the 1350s. Like all other places, Europe was hit hard: people fled westward from the Byzantine Empire and brought with them both the plague and scientific writings. It would take Europe 150 years to recover politically, economically and socially.

The religious institutions were the ones to recover the slowest. Not only were they hit hard because of the dense congregation of monks and nuns, but they were also the last to be repopulated, as parents needed every available child in the family’s economy, agriculture, et cetera, in the decades following the Plague.

This is relevant because monks and nuns were the ones making books in this time. When you wanted a book copied, you would go to a scribe at a monastery, and they would copy it for you. By hand. No copy would be perfect; every scribe would fix spelling and grammatical errors while making the copy, as well as introduce some new ones.

Also, since all scribes were employed (read controlled) by the Catholic Church, there was quite some limitation to what books would be produced. Not only was the monetary cost of a single book astronomical — one copy of The Bible required 170 calfskins or 300 sheepskins (!!) — but there was also a limit to what teachings would be reproduced by a person of the clergy. Nothing contradicting the Vatican was even remotely conceivable.

By 1450, the monasteries were still not repopulated, and the major cost of having a book copied was the services of the scribe, an undersupplied craft still in high demand. This puts things in proportion, given the astronomical cost of the raw materials and that they were a minor cost in ordering a book. In 1451, Gutenberg perfected the combination of the squeeze press, metal movable type, oil based print inks and block printing. At the same time, a new type of paper had been copied from the Chinese, a paper which was cheap to make and plentiful. This made scribecraft obsolete more or less overnight.

The printing press revolutionized society by creating the ability to spread information cheaply, quickly and accurately.

Many arguments were used to justify this effort, trying to win the hearts of the people for going back to the old order. One notable argument was “How will the monks get paid?”.

The Catholic Church would eventually fail in this endeavor, paving the way for the Renaissance and the Protestant movement, but not before much blood had been spilled in trying to prevent the accurate, cheap and quick distribution of ideas, knowledge and culture.

This attempt culminated in France on January 13, 1535, when a law was enacted at the request of the Catholic Church, a law which forced the closure of all bookshops and stipulated death penalty by hanging for anybody using a printing press.

This law was utterly ineffective. Pirate print shops lined the country’s borders like a pearl necklace and pirate literature poured into France through contraband distribution channels built by ordinary people hungry for more things to read.

Next: England and a vengeful daughter.