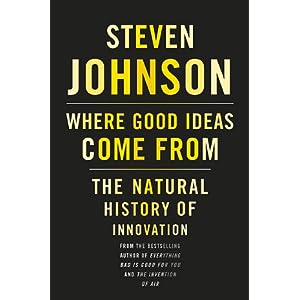 Steven Johnson’s new book, Where Good Ideas Come From: The Natural History of Innovation, looks fascinating–see this interesting video about the book by the author:

Johnson gives fascinating examples and cases to illustrate his point that innovation is often collaborative, involves a lot of borrowing, crowds, networks; it’s often slow (the “slow hunch”) rather than the lone genius having the Eureka! moment. See also this BBC interview with Johnson, mentioned in my post The business of innovation: Steven Johnson. He notes, for example, that Gutenberg was inspired by the screw press used to press wine–he realized it could be adapted to use as a printing mechanism. See also the extensive comment thread discussion of this in my Mises blog post Where Good Ideas Come From.

Peter Merholz has a good book review up here. He writes:

I found Good Ideas to be a surprisingly curious book. I suppose I was expecting more on the “innovation” front, from a business and technology perspective, but what Steven delivers is strongly weighted on the “natural history” front, with descriptions of coral reef formation, neuronal processes, and other natural phenomena. I suppose that shouldn’t be surprising — since Emergence, Steven has had a strong natural science bent, whether ecological, neurological (Mind Wide Open), or microbial (The Ghost Map).

Let me also say that I liked the book. It took a while to grow on me. It wasn’t clear where it was leading, and the collection of stories, and their relationships, felt like a jumble for a while.

But then I realized that the book was an exercise in it’s primary biological metaphor – the coral reef. Coral reefs are remarkably fecund environments, accreting over time in such a way to support a dazzling number of species. The accretion of stories in the book ends up mimicking that process of coral reef development — Steven gathers a bunch of narratives, some with strong connections to one another, others looser, and the reader is left to make sense of the juxtapositions on their own.

This is actually where I prefer Steven’s approach to that of Gladwell. Gladwell might be a better storyteller, but he’s a terrible theoretician — a Mack truck can be driven through the holes in his grand themes (Blink being the prime offender; it refutes itself almost immediately.) Steven doesn’t attempt to knit things too neatly — he presents them, as if in a wunderkammer, with more of a curatorial than authorial orientation.

Rereading my criticism of his prior work, The Invention of Air, I’m amused at how what I found to be flaws in that work turn out to be strengths in this one. InAir I criticized the aimlessness and lack of explicit direction, whereas in Ideasthose serve the subject. I think it’s because Ideas is a book about ideas, which are nebulous, networked, and squishy things, whereas Air was ostensibly about a man and his work, which necessitates a focus that I found lacking.

Anyway, Ideas is among the most thought-provoking books I’ve read in a while. It’s the perfect book-club book, the kind of book you want your friends to read so you can talk about it with them.

Next post: In the Air: Who says big ideas are rare? by Malcolm Gladwell