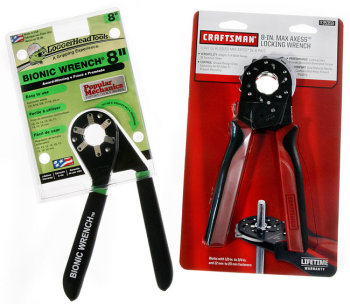 In this Yahoo article, we are told woes of Dan Brown, an American producer of the patented “Bionic Wrench,” who is upset that a competing product, “Max Axess,” is too similar … and is made in China. Brown had been selling his wrench with Sears, but then Sears started also selling the Max Axess wrench as part of its Craftsman line.

Whines Brown of the competition from Max Axess: “You cannot have big offices and fancy cars and everybody with an administrative assistant, because we are competing with China,” he said. Brown’s company’s

lawsuit, Mr. Brown said, will most likely include claims that Sears interfered with the company’s ability to do business with other stores.

“I’m in favor of free trade,” Mr. Brown said. “The person who’s out-innovated loses. But it’s destructive when someone competes but doesn’t out-innovate, they just produce it in a different market without regard to safety codes and human conditions.”

Everybody knows that it’s okay to out-innovate, so long as you don’t produce it in a different market! It’s just obvious! And thank goodness for heroic, watchdog citizen-businessmen like Mr. Brown helping to make sure that competitors adhere to appropriate “safety codes and human conditions”. Of course, we all know that if Mr. Brown could be shown that Max Axess was perfectly safe, then he would take his whipping like an out-innovated man and never ask for any kind of protectionist favoritism from his government.