The death of online piracy: the end of the Internet as we know it

The death of online piracy: the end of the Internet as we know it

Summary: Piracy finds its way into just about every legitimate avenue on the Internet. As such, the death of online piracy via shutting down otherwise legitimate sites and services could mean the end of the Internet as we know it. 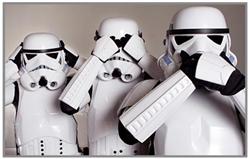 The death of online piracy: the U.S. government wants it and copyright holders want it, but at what cost? As we’ve seen from SOPA and PIPA, the government would be willing to completely cripple the Internet to see to the death of online piracy; and now, the shuttering of MegaUpload by the U.S. government (as a result of pressure from copyright holders) has caused waves in the file-sharing business; a business that — amongst perfectly legal profits — is rife with HUGE profits that come as a direct result of the sharing of pirated content. Yes, the death of online piracy as we currently know it is going to happen at some point; but to severely cripple (never mind completely obliterate) online piracy would come at the cost of the current freedoms the Internet enjoys — be it from an end-user perspective, a service provider perspective, or both.

You see, I am more fascinated with piracy than most. It’s a topic that has captivated me for many years and the debates sparked on the subject are absolutely riveting when intelligible people opinionate from either side. Plus, my security consulting endeavors and Google hacking escapades have opened my eyes to more avenues of piracy than are readily apparent to most. As such, to effectively end online piracy, I see that FAR more will have to be done than simply shutting down file-sharing sites. I fear that the most significant changes will be brought forth by legislation, and it WILL happen one day if the piracy war continues as it has thus far.

To give you a small and scary sampling of what obliterating online piracy might mean for the Internet, I present the following points for your consideration:

1 – File-sharing site censorship: Put simply, a complete restructuring and lock-down of file-sharing sites would have to occur for them to even exist. And though it could work just fine in theory, it couldn’t work without handing over a certain amount of freedom and convenience. Every file uploaded to a file-sharing site would have to somehow be guaranteed to either not be copyrighted, or the uploader would have to provide credentials which, under certain guidelines/legislation, show that they can share what they’re sharing — most likely with an intended number of receivers who might also have to provide proper access credentials. As it currently stands, it’s FAR too easy to fly in under the radar of current file-sharing sites that try to auto-detect copyrighted files. Gone would be the days of file-name obfuscation and password-protected 7-zip files.

Next post: Update: Harry Potter and the Stolen Font Lawsuit