Interesting report from ExtraTorrent: File-Sharing Religion Was Rejected By Swedish Authorities (h/t Wendy McElroy) about an attempt by “the Pirate Party of Uppsala to have their beliefs regarding the data copying and sharing activities recognized as a religious faith called The Missionary Church of Kopimism. The name of the church comes from the “Kopimi”, which is pronounced as “copy me”.” As ExtraTorrent explains:

Everyone understands that file-sharing is widely practiced today, and people do share files religiously. However, even though file-sharing is a regular part of user’s lives, this doesn’t make file-sharing a religion, according to the Swedish authorities. 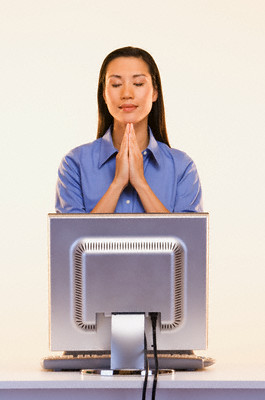 A few months ago an apparent movement appeared in Sweden to declare file-sharing as a religion. The movement became known worldwide as Kopimism and now has its own site. The online service describes their belief system, saying that they call for “all knowledge to all”. Besides, they claim that the search for knowledge, the circulation of knowledge, and the act of copying are sacred.

The website of kopimists explains that throughout history, different groups all over the world have been persecuted by oppressors, which made them since take refuge in religion and want a peaceful coexistence, which won’t involve any threats or harassment.

The new religion believes that communication is sacred and therefore needs to be respected. In addition, it is considered a direct sin to monitor and eavesdrop on people. In other words, the absolute secrecy appears to be holy in the church of kopimism. What is more important, in the individual pastoral care and confession with the kopimist priests, they should be protected under the country’s law by an absolute professional secrecy.

Although these beliefs sound convincing to some people, they apparently didn’t convince Swedish authorities. According to the media reports, Swedish officials rejected to allow file-sharing as a religion and ruled against a Swedish group’s effort to have online file-sharing recognized as an act of religious worship.

A recent post on the site of the Missionary Church of Kopimism provides a good example of how they try to make their belief in file sharing sounds religious:

It has reached my knowledge that a holy deed has been committed against the oppressive system of scientific journals. This deed was committed by no other than Greg Maxwell himself – according to the GPG-signature. He has uploaded 33 gigabytes of copies of the copyright protected journal Philosophical Transactions of the Royal Society. Blessed be he always. I urge you all to download not only the journals but the text he has written of his actions to your minds, and upload it to everyone you can.

Let science flow, through fiber an’ through copper. Let knowledge fly through our satellites and back. Let understanding be copied to eachothers minds, through dialogue and reading. Let scientific data be mailed, downloaded and uploaded. Praised be Greg Maxwell for his deeds for information, science and life all over this world.

Previous post: It Was Never About The Money, Stupid